With the knowledge that it’s now no longer taking on water at the rear, sitting at the correct water line and we can easily manage the aircraft in the shallows using waders we can move onto the RC boat bit of the test. With Dave in the follow boat along with three others either driving filming or taking photos we set off for 25 minutes of testing the model at slow speeds. Dave will be able to talk in more detail but the handling seemed ok although it was hampered by weed collecting on the ski struts as you can see below. 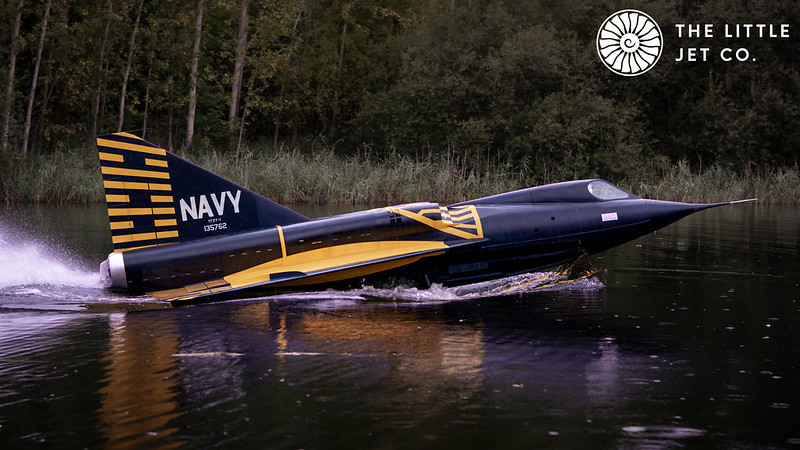 The water rudders at the back which are actuated by two big Savox waterproof servos worked well and continued to work even when submerged for over 5 hours. The wind was around 8 knots and the huge vertical stabiliser did hinder things but it was still possible to turn in either direction without assymetric thrust. The full size aircraft used a combination of asymmetric thrust and rudder to turn and in the second test the water rudders were not used but it was still possible to control direction using only asymmetric thrust.
https://www.littlejetco.com
Top

After many emails and messages asking for video we have finally put together some footage of our first test taken back in September 2020. We hope everyone is keeping safe and well and when movement restrictions are relaxed and it's sensible to do so we will be ready for the next set of tests culminating in the first flights.

It seems to display a willingness to rise up onto the ski. This is an amazing project, fair play to all involved
Top

Hi Alex and the team, I hope that you're all well and have been keeping safe.
Now that Spring is here, and the weather is improving and lockdown is beginning to ease. Are you any closer to making those first flights of the Sea Dart?
I am so looking forward to watching any videos that you may have.

We hope to do the next set of tests this summer, possibly July but this is yet to be confirmed.

Hi Alex & of course the team,
It's been a while since your last posting, is there any progression toward the maiden flight?
I hope that all is well

We are progressing and have just completed the second set of hydrodynamic tests last month. We have some challenges to overcome now we are exploring the higher speed elements on the water. We have made a video update detailing our progress and this will be uploaded this week. I will post the url on here when complete.

A video update regarding the latest round of hydrodynamic testing on our Convair SeaDart.

Hi Alex,
I hope that you are keeping well.
Having watched your last video clip, which I found very informative. Has there been any further progression towards a maiden flight?

This just popped up on my Instagram feed https://www.instagram.com/tv/CWxw_faBFs ... =copy_link
Top

Hi Alex and the team.
The build thread has gone very quiet,
I hope all is well and would like to wish you all a very happy new year, and indeed to all the membership of the LMA.

This came up in a Tweet this afternoon
Top

We're still here... plenty of work has been completed in ancipation of another test. We have completely re-designed the aft ski mechanism to allow the oleo extension to be controlled hydraulically and have damping through the use of an oil/air accumulator so the oleo can still fully retract ready for ski retraction. We have even managed to have a net zero weight gain with the conversion helped with some new components and material changes etc... I'm hoping that all the new parts will arrive next week. Once I have everything in hand I'll do a proper update with some pictures.

Happy New Year to all,

I forgot to mention I have uploaded all the runs from our last tests which can be viewed on this playlist:

Happy New Year Alex and the Team. That is all great news, thank you Alex. Thank you also for the videos, I was mildly surprised at how quickly she raises her nose. I did get a bit concerned at times when she appeared to be "so close" to the banks. Thank you again for the update.
Cheers
maurice
Top

Hi Alex,
The build thread is very quiet!! I really hope that all is well and progressing towards completion.
Best regards

We've been busy on other projects since the start of the year with very little done on the SeaDart since my last brief update. The plan is to dust things off and start work on the model next month in preparation for further testing.

Hi Alex and team,
This thread has gone completely dead, and as an avid reader, and follower of the 'Sea Dart' I am some what fearful that this project has hit the buffers.
I for one hope that this is not the case, and hope it continues to its finality.
Any info would be gratefully received.

I don't look on here that much so I've only just seen your post. I believe the intention is the SeaDart will be completed although it's still in storage at the moment, we haven't done any physical work on it for around a year. I was hoping to get the go ahead to do some of the changes we mentioned in the last video this winter. We are currently very busy working with other projects but it will be fun to get back to the SeaDart. Fingers crossed we get to do some work on her!
https://www.littlejetco.com
Top
Post Reply
321 posts

Return to “Your New Projects”

Users browsing this forum: No registered users and 9 guests